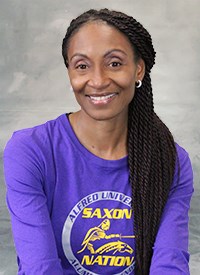 Meet Yourself Meditation - through the Eyes of Dr Angie Taylor

Dr Angie Taylor has enjoyed a distinguished career as an American athlete and coach, both at the intercollegiate and international levels. Since 2018 she has been the men's and women's track and field head coach at Alfred University, New York – where she uses her exceptional experience of coaching, mentoring, teaching to create an atmosphere that promotes successful high performances. She is also a co-developer and lecturer of the Foundations of Wellness course.

2015-2017 – Angie served as Project Manager for Team Nigeria in the 2016 Rio Olympics and Paralympics where 12 teams qualified and competed. She was part of the 2015 All-Africa Games held in Brazzaville, Republic of Congo where Team Nigeria finished second overall with 47 gold medals – the best team finish in the country's history.  She was a member of the National High Performance Task Team and the Director of National High Performance.

“I am a passionate and committed high performance training coach. I serve on multiple sports commissions and coach a wide range of ages. Having been an athlete myself, and surrounded by athletes performing at the highest levels my whole life, I know what it takes to succeed in self-improvement.

In the summer of July 2020, I was visiting my sister in Windsor, United Kingdom. One day we decided to walk to Datchet and just by chance we met Tasneem and Naheed. From meeting these two remarkable women, I became aware of Meet Yourself Meditation (MYM), and was keen to experience this Healing meditation.

The immense value I gained from practising MYM inspired me to setup weekly MYM sessions with Tasneem and Naheed for the Foundation of Wellness course I teach at Alfred University. One benefit that most of the students expressed is that by doing the MYM weekly sessions it is easier for them to stay focused with academic tasks. Additionally, their state of mind is stronger mentally and emotionally to overcome life challenges.

MYM is a guided and healing meditation practice that helps to bring peace and calmness to its participants. I believe that everyone can benefit from practising MYM:

Practicing MYM can help school age children focus more effectively in the classroom by promoting calmness, allowing for more alertness and focused learning. Additionally, practicing MYM allows you to ‘meet yourself’ and address what is causing stress, fear, anxiety. Once the students get to know themselves by looking inward, they will trust their thoughts and actions and thus, boost self-esteem. As for college/university students and adults, I believe the same outcomes are achievable by practicing MYM. This practice is especially useful for young people and adults dealing with depression and mental health issues.

I categorically believe that MYM sessions would be an excellent activity to incorporate into the workplace. Learning and practicing MYM will assist co-workers to manage possible conflicts, misunderstandings and stress.

If you’re considering MYM, my advice is to enrol in a few MYM sessions to experience a different type of meditation that offers healing components that are unique and different from most other types of meditations.  I believe that by practicing MYM, athletes, students, parents, everyone will learn consistently how to create a positive mental climate to perform at their best mentally, physically, emotionally, and spiritually.”


Learn about our Meet Yourself Meditation for Schools programme